What is Sri Yantra? 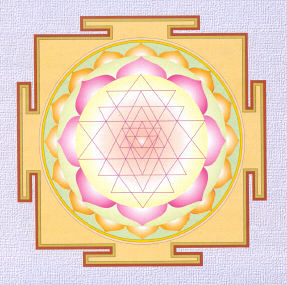 Sri. Yantra is Yantra of  Bhagawati Sundri. It is called "Yantraraja". It is Hymns of Mantras of Sri Lakshmi. Its each mantra has been sanctified and established. This body of Yantra or Yantra chakra contains Bindu (point), Rekha (line), Trikona (triangle) and Vritt( circle). They have been placed according to certain rules considering it as the body f a man with nine doors. Yantra is taken as the body of Ashta-Devata.

Yantra consists of one 0 in the center. Above the point, there are 4 triangles with face down and below the points 5 triangles with face upwards. This central point is the seat of "Bhagawati Tripura Sundri". It is called "Manidvipa also. In the body,  it is called "Hritpundarika" on which meditation of Ishta-devata is made. Thus, Sri Yantra contains nine triangles. They indicte nine Mool-Pravittis of formless Shiva. On the combinations of these triangles, 43 small triangles are formed . An Ashta Kamal Lotus with eight petals (Bhoomi, Jala, Anala, Vayu, Akasha, Mana, Buddhi and Ahankara) , Ashta-Lakshmi is shown encircling these triangles in the diagram.Outside this Lotus, there is another Lotus with 16 petals indicating 16 Matrukas. Outside this  external Lotus,  there is a three lines boundary-called "Bhoopr-(Chaturastra) chakra. Final part is a square of thick lines, which has four doors in four directions. On its corners Gods and Siddhis like Anima are placed.

In this Yantra reside many Gods (96) and Goddesses(2816). They satisfy desires of Devotees regarding their Bhoga and Moksha on its darshan and Puja (Worship) with faith and reverence.