News & Activity Report for the Month of July 2019 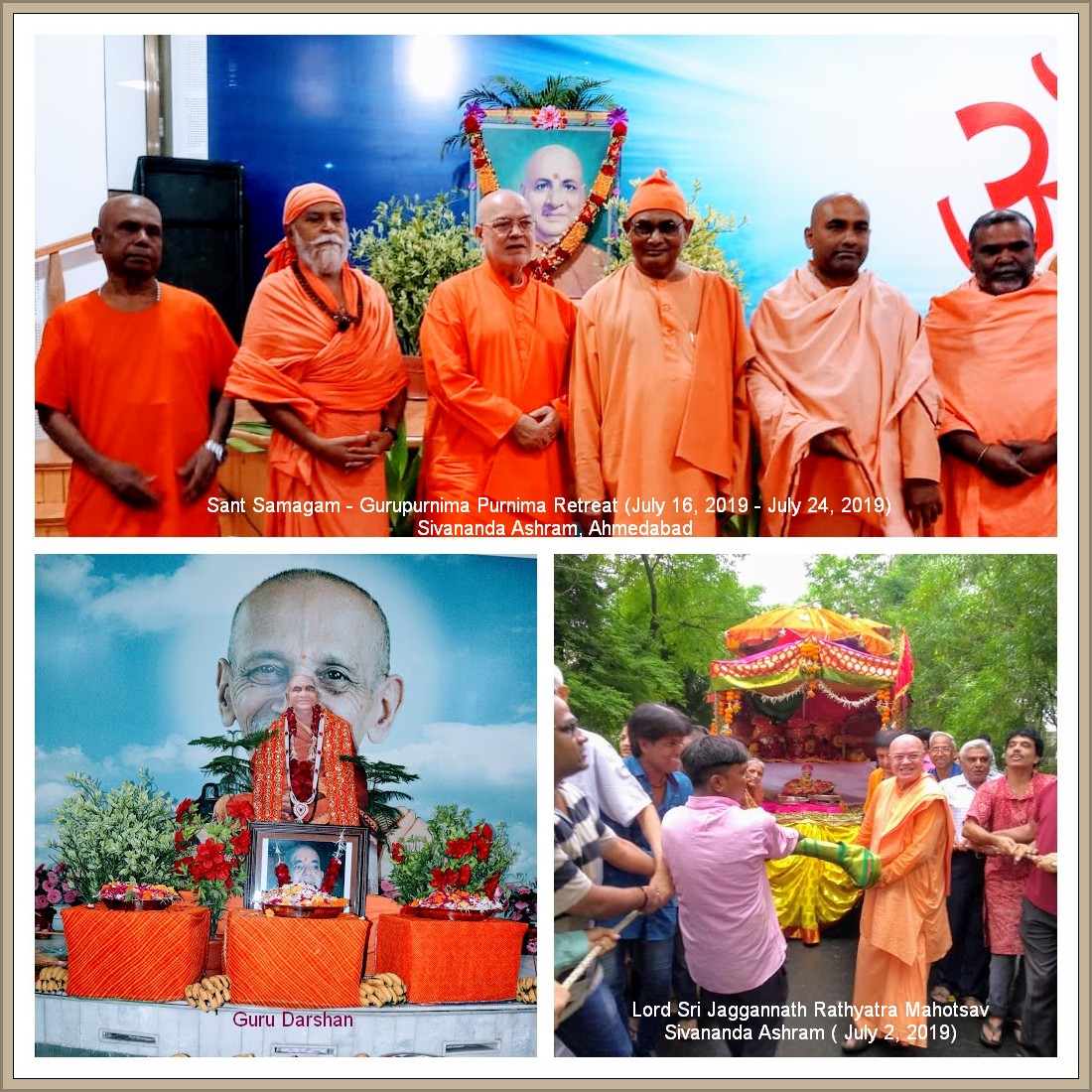 Chariot Festival (Ratha Yatra) of the Lord Jaggannatha at theAshram (July 2, 2019): As always, we had a graceful Ratha Yatra at the Ashram. The Idols of Lord Sri Jagannatha, brother Balaramji & sister Subhadraji were adorned splendidly after ceremoniously worshipped by the temple priest. Then the idols were mounted on the silver thrown in a decorated chariot and brought out for the procession. It was a joyous occasion for all. Revered Sri Swami Adhyatmanandaji took a lead to pull the chariot and Harinam chanting Devotees were singing and dancing in the praise of the Lord. Devotees present on the occasion experienced the Divine Presence of the Lord. More than six hundred devotees had grand Prashad Dudhpak & Malpuva and more. It was a feast enjoyed by all.

Pujya Sri Swami Adhyatmanandaji was invited by DD Girnar television channel for the running commentary for holy Chariot Festival of Sri Jagannath Temple of Ahmedabad. Home Minister of Indian Govterment Sri Amit Shah, Chief Minister Sri Rupaniji and many more ministers and dignitaries, attended morning worship service of the temple started at 4.00 am and there after. Thousands of devotees flocked from early morning at 2.30 am onwards. Ratha Yatra of Lord Sri Jaggannath completed 14 km route of Ahmedabad city. Pujya Swamiji commented from 3.50 am to 7.50 am and in the late evening from 8.30 pm to 10.00 pm.

Yoga Through (SIVA) Sivananda institutes of Yoga-Vedanta Academy: At the Ashram regular Yoga classes in seven batches for beginners and advanced yoga students carried out this month, as usual.

Sanskrit is a language of ancient India with a 3,500-year history. It is the primary liturgical language of Hinduism and the predominant language of most works of Hindu philosophy as well as some of the principal texts of Buddhism and Jainism.

Haridwar (July 7, 2019 - July 10, 2019): The Spiritual leader, His Holiness Sri Swami Satyamitranandaji, a founder of Sri Bharat Mata Temple at Haridwar attained Mahasamadhi on June 24, 2019. His holiness rendered invaluable services and established Samanvaya Seva Foundation to serve poor people from tribal and hilly areas by providing free education and medical facilities. He lived for the nation, downtrodden poor and sick. A prayer meeting for sixteen days were organized by Bharat Mata Temple. It was attended by grand gathering of saints, sages, religious head of all religions, Governors of different states and many more. Revered Sri Swami Adhyatmanandaji Maharaj gave heart touching tribute to His Holiness. Also prayer meetings were organized at KADI and at Sivananda Ashram, Ahmedabad which was attended by a number of sages, ministers from Government of Gujarat and devotees.

Mehsana (July 12, 2019 - July 18, 2019): For installation of a new incoming team of Rotary Mehsana and Lion Club, Ahmedabad, Pujya Sri Swamiji Maharaj was invited. At Rotary, Swamiji gave inspiring speech to connect Rotary with the world and at Lions Club for which Lions stands for the last 102 years.

Gandhinagar (July 15, 2019): H. E. Governor of Gujarat Sri Om Prakash Kohliji took retirement and left for Delhi. Pujya Swamiji and a group of devotees went to see him upon a courtesy visit. He had a special honor for Sri Swamiji and the activities run by Sivananda Ashram.

Ahmedabad (July 18, 2019): Tree plantation was done by Sivananda Ashram’s inmates in the space allotted by Municipal Corporation, Ahmedabad to plant about 80 trees of Margosa. Pujya Sri Swami Adhyatmanandaji Maharaj; Deputy Commissioner, Mr. Vishal Khanama from Ahmedabad Municipal Corporation graced the occasion and participated in the
plantation of trees. Sri Vijay Jajal of Sivananda Ashram has to take care for three years on behalf of ashram with the help of other lovers of trees.

Mahabharat Katha: During holy Shravan month ( Aug 1, 2019 - Aug 29, 2019) Mahabharat Katha with music is being organized every day from 5.30 pm to 7.00 pm at Sivananda Ashram, Ahmedabad by Padmsri Dharmiklal Pandya ji with music. All are cordially invited.