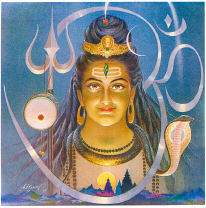 Lord Siva represents the destructive aspect of Brahman. That portion of Brahman that is enveloped by Tamo-Guna-Pradhana Maya is Lord Siva who is the all-pervading Isvara and who also dwells in Mount Kailas. He is the Bhandara or store-house for wisdom. Siva minus Parvati or Kali or Durga is Nirguna Brahman Himself. With Maya-Parvati He becomes the Saguna Brahman for the purpose of pious devotion of His devotees. Devotees of Rama must worship Lord Siva for 3 or 6 months before they take to worship of Rama. Rama Himself worshipped Lord Siva at the famous Ramesvaram. Lord Siva is the Lord of Ascetics and Lord of Yogins, robed in space (Digambara).

‘Hoam’ is the Bija Akshara of Lord Siva.

I bow with folded hands crores of times at the lotus-feet of that Lord Siva who is non-dual, who is the Adhishthana, or support for the world and all minds, who is Sat-Chit-Ananda, who is the Ruler, the Antaryamin, the Sakshi (silent witness) for everything, who is self-effulgent, self-existent and self-contained (Pari-purna), who is the remover of the primitive Avidya and who is the Adi-Guru or Parama-Guru or Jagad-Guru.

Snake On the Body of Siva

Serpent is the Jiva or the individual soul which rests upon Siva, the Paramatman or the Supreme Soul. The five hoods mean the five senses or the five Tattvas, viz., earth, water, fire, air and ether. They also represent the five Pranas, which hiss in the body like the serpent. The inhalation and exhalation are like the hissing of the serpent. Lord Siva Himself became the five Tanmatras, the five Jnanendriyas, the five Karmendriyas and other groups of five. The individual soul enjoys the worldly objects through these Tattvas. When the individual attains knowledge through control of the senses and the mind, he finds his eternal resting abode in Lord Siva, the Supreme Soul. This is the esoteric significance of Lord Siva wearing the snake on His body.

Generally serpents live for hundreds of years. Wearing of serpents by Lord Siva signifies that He is Eternal.

Namassivaya is the Mantra of Lord Siva. ‘Na’ represents earth and Brahma; ‘Ma’ represents water and Vishnu; ‘Si’ fire and Rudra; ‘Va’ Vayu and Mahesvara; ‘Ya’ Akasa and Sadasiva and also the Jiva.

Lord Siva has white complexion. What is the significance of white colour? He teaches silently that people should have pure heart and entertain pure thoughts and should be free from crookedness, diplomacy, cunningness, jealousy, hatred, etc.

He wears three white-lined Bhasma or Vibhuti on His forehead. What is the significance of this? He teaches silently that people should destroy the three impurities, viz., Anava (egoism), Karma (action with expectation of fruits), and Maya (illusion), and the three desires or Eshanas, viz., desire for landed property, desire for woman, desire for gold, and the three Vasanas, viz., Lokavasana, Dehavasana and Sastravasana, and then attain Him with a pure heart.

What does the Balipitha or altar which stands in front of the sanctum sanctorum of the Siva’s temple represent? People should destroy their egoism and mineness (Ahamta and Mamata) before they attain the Lord. This is the significance.

What does Nandi or the bull which is in front of Sivalinga represent? Nandi is the attendant or doorkeeper of Siva. He is the vehicle of Lord Siva. He represents Satsanga. If you make association with the sages, you are sure to attain God-realisation. Sages will show you the way to reach Him. They will remove pitfalls or snares that lie on your path. They will clear your doubts and instill in your heart dispassion, discrimination and knowledge. There is no other safe boat than Satsanga to reach the other shore of fearlessness and immortality. Even a moment’s Satsanga or association with the sages, is a great blessing to the aspirants and the worldly-minded persons. They get firm conviction in the existence of God through Satsanga. The sages remove the worldly Samskaras. The company of sages is a formidable fortress to protect oneself from the temptations of Maya.

Lord Siva represents the destructive aspect of the Godhead. He is seen absorbed on the mountain peak of Kailas. He is an embodiment of serenity, renunciation and indifference to the world. The third eye in the centre of His forehead represents His destructive energy which when let loose destroys the world. Nandi is His favourite. He is the door-Keeper. He is seen hushing all nature, so that the Lord may not be disturbed in His Samadhi. The Lord has five faces, ten hands, ten eyes, two feet.

Vrishabha or the bull represents Dharma Devata. Lord Siva rides on the bull. Bull is His vehicle. This denotes that Lord Siva is the protector of Dharma, is an embodiment of Dharma or righteousness.

Deer represents the Vedas. Its four legs are the four Vedas. Lord Siva is holding the deer in His hand. This indicates that He is the Lord of the Vedas.

Salutations and adorations to the blissful Lord Siva, the lover of Uma or Parvati, the Lord of all beings (Pasupati).

“Alankarapriyo Vishnuh, Abhishekapriyah Sivah—Lord Vishnu is very fond of Alankara (fine dress, beautiful ornaments, etc.); Siva is fond of Abhisheka.” In Siva temples, a pot made up of copper or brass with a hole in the centre is kept hanging over the image or Linga of Siva, and water is falling on the image throughout day and night. Pouring over the Linga, water, milk, ghee, curd, honey, cocoanut water, Panchamrita, etc., is Abhisheka. Abhisheka is done for Lord Siva. Rudra is chanted along with the Abhisheka. Lord Siva is propitiated by Abhisheka.

Lord Siva drank the poison that emanated from the ocean and wore the Ganga and moon on His head to cool His head. He has the fiery third eye. Constant Abhisheka cools this eye.

The greatest and the highest Abhisheka is to pour the waters of pure love on the Atmalinga of the lotus of the heart. The external Abhisheka with various objects will help the growth of devotion and adoration for Lord Siva and eventually lead to internal Abhisheka with pure abundant flow of love.

Abhisheka is a part of Siva Puja. Without Abhisheka, worship of Siva is incomplete. During Abhisheka Rudra, Purushasukta, Chamaka, Maha-mrityunjaya Japa, etc., are chanted in a particular rhythm and order. Monday is very important day for Lord Siva and the thirteenth day of the fortnight (Pradosha) is very sacred. On these days, devotees of Siva worship Him with special Puja, Abhisheka with Ekadasa-Rudra, Archana, offering plenty of Prasad, and illumination.

In Ekadasa-Rudra Abhisheka, every Rudra is chanted with distinctive articles for Abhisheka. Ganga water, milk, ghee, honey, rose-water, cocoanut water, sandal paste, Panchamrita, scented oil, sugarcane juice and lime juice are made use of for Abhisheka. After every Abhisheka, pure water is poured over the head of Siva. When Rudra is repeated once, the different articles of Abhisheka are made use of after every stanza of the Rudra. The Abhisheka water or other articles used for Abhisheka are considered very sacred and bestow immense benefits on the devotees who take it as the Lord’s Prasad. It purifies the heart and destroys countless sins. You must take it with intense Bhava and faith.

When you do Abhisheka with Bhava and devotion, your mind is concentrated. Your heart is filled with the image of the Lord and divine thoughts. You forget your body and its relation and surroundings. Egoism gradually vanishes. When there is forgetfulness, you begin to enjoy and taste the eternal bliss of Lord Siva. Recitation of Rudra or Om Namassivaya purifies the mind and fills it with Sattva.

If you do Abhisheka with Rudrapatha in the name of a person suffering from any disease he will be soon freed from that disease. Incurable diseases are cured by Abhisheka. Abhisheka bestows health, wealth, prosperity, progeny, etc. Abhisheka on Monday is most auspicious.

By offering Panchamrita, honey, milk, etc., to the Lord, thoughts of your body diminish. Selfishness slowly vanishes. You derive immense joy. You begin to increase your offerings unto the Lord. Therefore, self-sacrifice and self-surrender come in. Naturally, there is an outpouring from your heart, “I am Thine, my Lord. All is Thine, my Lord”.

Kannappa Nayanar, a great devotee of Lord Siva, a hunter by profession, did Abhisheka with the water in his mouth for the Linga at Kalahasti in South India and propitiated Lord Siva. Lord Siva is pleased by pure devotion. It is the mental Bhava that counts and not the outward show. Lord Siva said to the temple priest: “This water from the mouth of Kannappa, my beloved devotee, is more pure than the water of the Ganga”.

A devotee should be regular in doing Abhisheka for the Lord. He should get by heart Rudra and Chamakam. Ekadasa Rudra is more powerful and effective. In Northern India, every man or woman takes a lota of water and pours it on the image of Siva. This also causes beneficial results and brings about the fulfilment of one’s desire. Abhisheka on Sivaratri day is very effective.

May you all recite Rudrapatha which describes the glory of Lord Siva and His manifestations in every living being, in every animate and inanimate being! May you do Abhisheka daily and thus obtain the grace of Lord Siva! May Lord Visvanatha bless you all!

Reproduced from "Lord Siva and His Worship" by Swami Sivananda