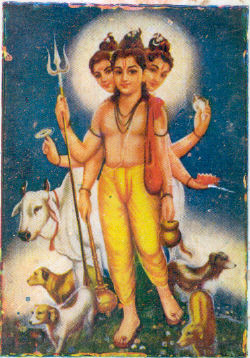 Who is regarded as an Incarnation of the Trinity.

DATTATREYA Jayanthi falls during December-January on the full moon day of the month of Margaseersha. His story is told as follows.

Anusuya is quoted as the model of chastity. She was the wife of Atri Maharishi, a great sage and one of the seven foremost seers and sages. She was well established in the Pativrata Dharma, the main elements of which are devotion to husband and regard of him as God Himself. She did severe austerities for a very long time in order to beget sons equal to Brahma, Vishnu and Shiva, the Hindu Trinity.

Once, Saraswathi, Lakshmi and Parvati requested their husbands (the Trimurtis) to test the Pativrata Dharma of Anusuya, by asking her to give them alms with an unclothed body.

Brahma, Vishnu and Shiva came to know of the austerity and desire of Anusuya. So, they agreed to their wives’ request, as they knew that by agreeing to it, they would also be fulfilling Anusuya’s wish. They put on the garb of Sannyasins and appeared before Anusuya, asking her to give them alms as specified by their wives. Anusuya was in a great dilemma. She could not say “No” to the Sannyasins. And she had to maintain her Pativrata Dharma also, which she would be violating if she appeared naked before men other than her own husband. She meditated on the form of her husband, took refuge at his feet and sprinkled over the three Sannyasins a few drops of water used for washing the feet of her husband. Immediately the Trimurtis were transformed into three babies on account of the glory of her chastity. At the same time, there was accumulation of milk in her breast. She thought that these children were her own and fed them with the milk, in a nude state and cradled them. She was eagerly expecting the arrival of her husband who had gone to have a bath.

As soon as Atri Rishi returned home, Anusuya related all that had happened during his absence, placed the three children at his feet and worshipped him. But, Atri knew all this already through his divine vision. He embraced all the three children. They became one child, with two feet, one trunk, three heads and six hands. Atri Rishi blessed his wife and informed her that the Trimurtis themselves had assumed the forms of the three children to gratify her wish.

In the meantime, Narada went to Saraswathi, Lakshmi and Parvati and informed them that their husbands had been turned into children through the power of the Pativrata Dharma of Anusuya and that they would not return unless they asked for their husbands as alms from Rishi Atri. Thus Saraswathi, Lakshmi and Parvati assumed the form of ordinary women, appeared before Atri and asked for their own husbands as alms. Atri duly honoured the three ladies and, with folded palms, prayed to them that his wish and the wish of Anusuya should be fulfilled.

Then, the Trimurtis appeared in their true form before Atri and said, “This child will be a great sage according to your word and will be equal to us, according to the wish of Anusuya. The child will bear the name of Dattatreya.” Saying this they disappeared.

The child Dattatreya soon attained manhood. As he had the rays of the Trimurtis and as he was a great man of the highest wisdom, all the Rishis and ascetics worshipped him. He was gentle, peaceful and amiable. He was an Avadhuta—an ascetic who always remains naked. He preached the Truth of Vedanta. Dattatreya taught his Avadhuta Gita to Lord Subramanya. This is a wonderful book which contains the truths and secrets of Vedanta and the experiences of Self-realisation.

Once, while he was roaming happily in a forest, he met King Yadu, who, on seeing Dattatreya so happy, asked him the secret of his happiness and the name of his Guru.

Dattatreya said, “The Self alone is my Guru. Yet, I have learnt wisdom from twenty-four other individuals and objects. So they, too, are also my Gurus.”

Dattatreya then mentioned the names of his twenty-four Gurus and spoke of the wisdom that he had learnt from each as follows:

1. I learnt patience and doing good to others from the earth.

2. From water, I learnt the quality of purity.

3. I learnt from air to be without attachment though I move with many people in this world.

4. From fire I learnt to glow with the splendour of Self-knowledge and austerity.

5. I learnt from the sky that the Self is all-pervading and yet it has no contact with any object.

6. I learnt from the moon that the Self is always perfect and changeless and it is only the limiting adjuncts that cast shadows over it.

7. Just as a sun reflected in various pots of water appears as so many different reflections, so also Brahman appears different because of the bodies caused by the reflection through the mind. This is the lesson I have learnt from the sun.

8. I once saw a pair of pigeons with their young birds. A fowler spread a net and caught the young birds. The mother pigeon was very much attached to her children. She fell into the net and was caught. From this I have learnt that attachment is the root cause of earthly bondage.

10. Just as the ocean remains unmoved, even though hundreds of rivers flow into it, so also the wise man should remain unmoved among all the various sorts of temptations, difficulties and troubles.

11. To control the sense of sight and to fix the mind on the Self, is the lesson I learnt from the moth.

12. I take a little food from one house and a little from another house and thus appease my hunger. I am not a burden on the householder. This I learnt from the black bee which gathers honey from various flowers.

13. Bees collect honey with great trouble, but a hunter comes along and takes the honey away easily. From this I learnt that it is useless to hoard things.

14. The male elephant, blinded by lust, falls into a pit covered with grass, even at the sight of a female elephant. Therefore, one should destroy lust.

15. The deer is enticed and trapped by the hunter through its love of music. Therefore, one should never listen to lewd songs.

16. Just as a fish that is covetous of food falls an easy victim to the bait, so also the man who is greedy for food loses his independence and easily gets ruined.

17. There was a dancing girl named Pingala. Being tired of looking for customers, one night she became hopeless. She had to be contented with what traffic she had that day and retired to a sound sleep. I learnt from this fallen woman the lesson that the abandonment of hope leads to contentment.

18. A raven picked up a piece of flesh. It was pursued and beaten by other birds. It dropped the piece of flesh and attained peace and rest. From this I learnt that a man in the world undergoes all sorts of troubles and miseries when he runs after sensual pleasures and that he becomes as happy as the bird when he abandons them.

19. The child who sucks milk is free from all cares, worries and anxieties, and is always cheerful. I learnt the virtue of cheerfulness from the child.

20. The maiden was husking paddy. Her bangles made much noise and there were visitors from her husband’s house. To silence the bangles, she removed them, one by one. Even when there were just two, they produced some noise. When she had only one, it did not make any noise, and she was happy. I learnt from the maiden that living among many would create discord, disturbance, dispute and quarrel. Even among two there might be unnecessary words or strife. The ascetic or the Sannyasin should remain alone in solitude.

21. A serpent does not build its own hole. It dwells in the holes dug out by others. Even so, an ascetic should not build a home for himself. He should live in a temple or a cave built by others.

22. I learnt from the arrow-maker the quality of intense concentration of mind.

23. The spider pours out of its mouth long threads and weaves them into cobwebs. Then it gets itself entangled in the net of its own making. Even so, man makes a net of his own ideas and gets entangled in it. The wise man should, therefore, abandon all worldly thoughts and think of Brahman only.

24. The beetle catches hold of a worm, puts it in its nest and gives it a sting. The poor worm, always fearing the return of the beetle and sting, and thinking constantly of the beetle, becomes a beetle itself. I learnt from the beetle and the worm to turn myself into the Self by contemplating constantly on It; thus I gave up all attachment to the body and attained liberation.”

The king was highly impressed by listening to these enlightening words of Lord Dattatreya. He abandoned the world and practised constant meditation on the Self.

Dattatreya was absolutely free from intolerance or prejudice of any kind. He learnt wisdom from whatever source it came. All seekers after wisdom should follow the example of Dattatreya.

On Dattatreya Jayanthi, get up at Brahmamuhurta and meditate. Fast and pray throughout the day. Do not mix with anybody. Live in total seclusion. Forget the body. Identify yourself with the blissful Self. Study Dattatreya’s glorious works, namely, the Avadhuta Gita and the Jivanmukta Gita. Worship Lord Dattatreya’s (or, your own Guru’s) form. Take wholesome resolves that you will follow the great teachings of Lord Dattatreya. You will realise the Self very soon.

May you all enjoy the choicest blessings of Lord Dattatreya, and may you all attain the highest goal, Self-realisation in this very birth!