At Atlanta ( - )
Report by Sri. Ponangi.
Swami Adhyatmanandaji’s Yoga classes reverberated in Atlanta:  Free Yoga classes conducted by Swami Adhyatmananda from Nov 4 – Nov 8 attracted many and the way Swami taught yoga to participants still reverberating in the minds of all participants. Young, old and children from all walks of  life participated in these yoga classes enthusiastically. People from diverse nations and cultures attended these classes in big numbers as the Atlanta based news daily; Atlanta Constitution journal had published a story on yoga with Swamiji’s bio just before Swami’s arrival in

Sri. Sai Sailendra inaugurated five-day free yoga classes by lighting a traditional lamp at Global Mall on Thursday, Nov 4 Swami Adhyatmananda while addressing the participants said that yoga is not a religious thing. Even while explaining the benefits of chanting , Swamiji said that chanting of OM would benefit to calm and energize the mind. In this, no religion is involved. No doubt it has come from ancient Rishis of India. Swamiji said that it is only through Yoga that one can attain mental and physical balance. Swami Adhyatmanandaji’s yoga classes included flexibility exercises, yogic postures, breathing exercises, relaxation methods, Surya namaskar postures, practice of meditation, Pranayama etc. Candle light meditation by all participants was the high light on the concluding day. Many participants told India Tribune that Swamiji’s teaching of Yoga is filled with many useful tips and enjoyed the way he took yoga classes with anecdotes. It’s a wonderful experience and we are fortunate to get this opportunity, they said.

Swami Adhyatmananda visited Shree Shakti Mandir at Lake City and given a spiritual discourse. Swamiji has also visited Hindu of Atlanta at Riverdale and addressed 200 strong children and exhorted them to cultivate virtues and eradicate vices. Swamiji sang Swami Sivananda’s famous song “Ramakrishna Govinda, Don’t smoke Govinda, It will spoil Govinda, Krishna Rama Govinda” in chorus with children. The song attracted the attention of both parents and children attended the meeting. Swamiji has also visited the local Sri Swaminarayan mandir where he was received with honor. Swamiji has addressed about 600 devotees of Swaminarayan samstha and spoke at length about Swaminarayan movement and the importance of living to ideals of Pramukh Swamiji maharaj. He also briefed his association with Sastryji Maharaj, Pramukh Swamiji and others. Swami Adhyatmananda has also met visiting Buddhist monks in.

Hindu Temple of Greater Chicago hosted Rev. Swamiji’s seven days Yoga Camp in the morning 6.00am to 7.30 am. It was attended by a large number of yoga enthusiasts including yoga teachers of all nationality. This time Swamiji not only took preliminary flexibility exercises for the beginners but also taught advanced Yogasana postures, Pranayama including Sivananda Pranayama, Yoganidra,  and Meditation techniques in detail at the request of others who are well advanced in the yoga field. The program was extremely well received and  very much appreciated by all participants. In the evening Swamiji’s discourses were organized at various organizations namely, Hari Om Mandir, Sri. Gayatri Parivar, Sri. Arbindo Kendra, Swadhyay parivar and Indian American Cultural center. As always, welcome satsang was held at Spiritual Life Foundation, Oak Brook. Swamiji spoke on various subjects stressing the importance of a life of moderation and daily Sadhana. 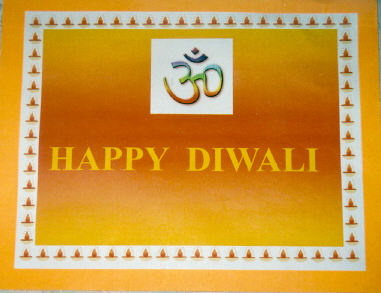 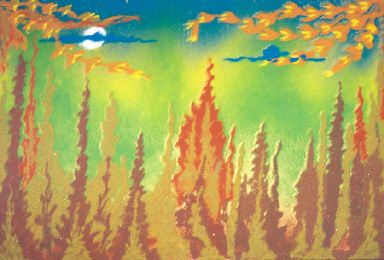 It was a special Diwali time and all were in festive mood. An artist in Swamiji created a beautiful rangoli. That was a special treat for us. On Saturday, the very first day of a new year (Indian calendar), Swamiji took part in a Grand Annkoot darshan and Aarati at Sri. Swaminarayana Mandir (BAP’S). Swamiji’s one week stay here was completely filled and hectic with home visits, home satangs, visit to ailing and sick devotees etc. The day began at till 11.00 pm on most of the days. It's a challenge for the host to keep up with his energy level. Swamiji was invited to preside over two day long Yoga –Philosophy conference organized at in Chicago and gave the keynote address. It was attended by a group of faculty members of the university, including the dean and the head of the department of Philosophy.

Last day satsang was a special feast for devotees of having an hour long soul stirring Kirtan by Swamiji. being anchor and hub of his visits to the United States and Canada since 1995, people of this city have great love and regards for Swamiji and He does not need formal invitation for Chicago. Widely read  “India Tribune” newspaper carried an article about Pujya Swamiji and his mission of spreading the message of Holy Master Swami Sivanandaji Maharaj.

On Nov 15, 2004 upon his arrival Smt. Bhavani sarkar,  Sri.Shantanu Sarkar and Sri Pareshbhai Patel welcomed Swamiji Maharaj with flowers and garland at the airport. Evening satsang and Padpuja were performed by Bengali Samaj at Smt. Bhavani and Santanu Sarkar’s home. On a grand Satyanarayan pooja, archana, satsang and Bhandara were organized at Sri. Paresh Patel’s home. Swami Sivanandaji’s literature, jnana prasad, was distributed to the large gathering. During the two-days stay here, Swamiji was invited at many devotees homes and businesses for his grace and blessings. On early morning of Rev. Swamiji departed for Los Angeles for a week long program.

A week long Yoga Camp and series of discourses were organized at famous Sanatan Mandir of Norwalk, Cerritos. Because of the vast publicity by leading Indian news papers such as India Post, India Journal, News Asia etc, a large number of yoga enthusiasts attended the morning and evening yoga classes. All were benefited by Rev. Swamiji’s wisdom pouring out in simple sharing with love and sincerity. Hindi discourses on the subject of “Stress management through Self Management” captivated the crowd for all seven days. Rev. Swamiji was invited for home visits, home satsnags as well as business houses as usual. Special satsangs were also organized at Radha Raman Temple and Senior Citizen Center

After a day’s break at Chicago, a last stop of this trip in

Holy "Tulsi Plant" was brought by Swamiji from Los Angeles and planted by him at the last minute before going to airport and fulfilled a silent wish of mother of the house. Many thanks for that.

On Sri. Swamiji was welcomed by devotees of Anoopam Mission, “AMUK” at Heathrow airport. On Nov 27 & Nov 28 i.e. Saturday and Sunday satsangs, house visits were organized at number of places namely at Anoopam Mission, Sri. on the occasion of  205th Jalaram Jayanti and famous Sri. Swami Narayana (BAP’s) temple. Large numbers of devotees hailed Rev. Sri. Swamiji and listened to his discourse at Sri. Swami Narayan Mandir. Swamiji’s unity in diversity and equal reverence for all saints, sages, cast, creed and people of all walks received a great admiration.

After spending three days at Bristol (UK) and stop by visit to Lester Rev. Swamiji departed for

For organizing this entire tour to

It was continuation of Yoga camp at Anoopam Mission up to. In the evening Sri Swami Adhyatmanandaji’s discourses based on Sri. Lord Swami Narayana’s life and teaching and from Swami Gunatitanandaji’s teaching were of great attraction to the devotees. On Oct 2, 2004 birthday anniversary of Pujya Bapuji, Mahatma Gandhiji,  plantation of trees was done by Sri Jashbhai and Pujya Swamiji at Lion gate of Anoopam Mission campus. At conclusion of a week long yoga retreat a farewell satsnag was held in the evening. After Swamiji’s discourse, devotional music, and cultural program was organized and it was followed by dinner. Large number of devotees participated in the evening festivity. On morning of Sunday, Oct 3 Swamiji was given sand off after prayer by devotees of Anoopam Mission.

From Coplay, Rev. Swamiji went to Bhartiya Temple at .

From Oct 7, 2004 - Oct 13, 2004 Rev. Swamiji’s Yoga camp and evening discourses in the subject of “ In Search of the Soul” were organized at Bharatiya Temple of Tampa, Florida. Dr. Gaurangi Patel and Dr. Ramappa took great interest in organizing the program. Smt. Rashmi & Sri Ram Jakhotia hosted Swamiji.  Also Rev. Swamiji graced many devotees home as well as went to and consoled number of sick patients.

On invitation, of Sri. Suren Mehta, during Holy Navratri, Swamiji went to Winnipeg ,Manitoba. As such, Swamiji was planned to go to Haiti but because of cyclone and natural calamities trip to Haiti was canceled.

At Winnipeg, with cooperation of Hindu Senior Citizen Center a week long yoga camp was organized. The Yoga session was held in the morning as well as in the evening on request of people. At night Swamiji gave heart touching discourses upon “Stress management through Yoga”. A large number seekers avail the benefit of Swamiji’s teaching. Rev. Swamiji was invited to visit cardiovascular research institute at Winnipeg . Dr. Naransan Lagga, a surgeon and a research scholar welcomed him there. Also Swamiji visited number of businesses and devotee’s home here.

Smt. Chndrakalaben and Sri. Suren Mehta, a host of Swamiji at 1982-1985 and they have been practicing since.

Swamiji was received by Sri. Kanu Patel and Vimu Patel in

On Bhajan sandhya was arranged and devotees gathered at Sivanada Ashram to wish their beloved Swamiji Maharaj on the eve of his departure for spiritual tour to the West. Smt. Aartiben Munshi, Shri.Saumilbhai Munshi and Shri Shyamalbhai Munshi were the singer artists. At the conclusion of the program 12.oo am traditional Vedic puja at the temple was performed just before Swamiji proceeded to the airport. Also Swamiji Maharaj paid his respect to Paduka of Guru Maharaj by keeping them on His head and took blessings of Pujya Dada Swami (Srimad Shankarananandaji) Maharaj, Pujya Swami Guru Sewananadaji, Pujya Swami Bhakti Priyanandaji Mataji, Revered Dadoo (Dr.Jagannath Moudgil Sahib). Many devotees joined him to the airport to wish him safe journey.

Rev. Swamiji was received at ( ) by Yogiraj Shri Kries Mannie Sing along with his son and friends. They drove him to Hag ( ). Public Satsang and discourses were organized at Hag during his stay there. Also Radio talks of Swamiji were recorded on the subjects of Hindu religious festivals.

On Pujya Swamiji was welcomed by Naik family at their home in Vedic traditional manner. At night, welcome Satsang-Kirtan  and continuation of Rev. Swamiji’s Diamond Jubilee celebration was held which was followed by dinner.  On Sept 5, 2004  Pujya Swamiji was invited to a function organized by Anoopam Mission in the morning from 9.00 am to12.oo pm. Pujya Sri and Revered Shri Jashbhai Sahebji of Anoopam Mission and Shri Pujya Swami Hari Prasadji Maharaj of Hari Dham were all present at the occasion.

In the afternoon Rev. Sri Vedalankarji of Arya Samaj organized a satsang at Arya Samaj Center of Chicago. In the evening Swamiji addressed to a large assembly of devotees at newly inaugurated grand Shree Swaminarayan Mandir of BAPS institute.

On Rev. Swamiji arrived at ,. Morning Yoga session and evening satsang were organized by Smt. Arunaben and Shri. Dineshbhai Patel. of tree was done by Swamiji at their home also. Special Satsang and Satya Narayan Katha on the occasion of Janmashtami and 117th Birthday Anniversary of Holy master Sri Swami Sivanandaji Maharaj were also organized.

On   Rev. Swamiji arrived at

Programs at  Toronto  was organized by hard work of Shri. Kamlesh Daveji, Shri.Kunjvihari Daveji, Shri. Bharatbhai Tailor and Ms. Manjari Bhatt. Swamiji and Sivananda Ashram, Ahmedabad will remain heartily indebted to Shri. Kamlesh Dave and his family, a main organizer and a host. Media coverage was given to Swamiji’s program in leading Indian newspapers.

On Rev. Swamiji arrived at Shree Swaminarayan of at Coplay, Pennsylvania.  Here Swamiji Maharaj was given warm welcome by H. H. Sri Jashbhai Sahebji, a Spiritual Head of Anoopam Mission, Mogri (Vallabh Vidhyanagar, Anand). A week long Yogasana Classes in the morning and Gita Pravachan in the evening were organized here. Rev. Shri Shantibhai the personal Guru Bandhu of Sri Sahebji was present also. Devotees from other parts of