Be Aware Only of the One 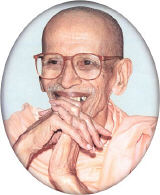 You are not only an amsa; aparoksha’nubhuti (direct experience) will establish it beyond doubt, make you experience beyond doubt, that you are identical with parabrahman. Jivo-brahmaiva naparah (the individual is not other than Brahman)—that is content of aparoksha’nubhuti. Therefore jivatva (individuality) is a superimposition due to upadhis (limiting adjuncts or additions). Brahmatva is your sahaja avastha (natural state).

It is not that jiva is identical with Brahman. It is Brahman alone that appears as jiva. Jivatva is only an appearance. Brahmatva alone abides: ekameva’dvitiyam brahma (Brahman is one alone without a second). It is the Reality: brahma satyam (Brahman is the truth).

It is to try to explain this central truth, to explain this mysterious, incomprehensible situation, that Vedanta devotes its entire exposition. Vedanta siddhanta (doctrine) makes use of many analogies and comparisons, brings in many logical arguments and proofs to establish this one truth: jivo-brahmaiva naparah (the individual is not other than Brahman), sarvam khalvidam brahma (all this is verily Brahman), ekameva’dvitiyam brahma (Brahman is one alone without a second).

Therefore, divine perfection is inherent in you and it is your birthright, because you are in essence the ever-free, ever-pure, ever-full, ever-enlightened Supreme Brahman. This is the truth to be grasped, meditated upon and to be reflected upon again and again—to be lived and ever held firmly to in spite of the vagaries of the mind, in spite of its restless and outgoing nature. To abide firmly in this central truth of your being is the core and essence of all sadhana.

The ultimate teaching of the Upanishads and Vedanta is tat tvam asi (you are That), and one who is able to hold firmly to this truth, one who is able to be rooted in this awareness, one who is able to always abide in this consciousness, attains victory over life. For that person, there is no sorrow, there is no bondage. That person ever rejoices. That person has conquered death itself. And that is what you are engaged in doing: conquering death. This is the central theme of the Mandukya Upanishad and is what is indicated by the Kathopanishad and the second chapter of the Bhagavad Gita.

How then does the bhakta who is in a state of duality consciousness harmonise with the supreme Consciousness? Very simple, the bhakta does not bother about himself or herself, or parabrahman, or the relationship between the two. Bhaktas solve their problem by thinking only upon the One. Who is that One? Ishta devata (chosen Deity). Ram bhakta does not think of himself or herself—thinks only about Rama. So there is no problem, because it is only if you think of yourself, and then God, that you have the problem of how to relate the two. The bhakta disdains to think of himself. He thinks only of his ishta devata, day and night, one hundred percent, whole heart, whole mind. He becomes saturated, filled with this thought.

To train the mind, to train the interior to assume this state is the greatest achievement. All sadhana is constant, determined, unremitting effort. What is Gangaji meditating upon? Gangaji is meditating only upon sagar (ocean). Day and night she meditates on sagar and flows steadily towards it. And the culmination is that there is no Ganga afterwards, there is only sagar.

That is the secret of going beyond all sorrow. In duality there is fear, there is sorrow. The secret of passing beyond sorrow and becoming established in bliss, peace, fearlessness, freedom is this inner state of being aware only of the One. That is the antahkarana (inner being) that leads to kaivalya samrajya moksha (the kingdom of final liberation). Any other form is a trap and a net. Where the antahkarana is unified in this one single truth, one great reality, one great contemplation, bhagavatakara vritti (thought of God), brahmakara vritti (thought of Brahman), there is jivan-mukti (liberation while living), because that supreme tattva (Reality) is svatantra, sarvatantra (independent, free, all-powerful), ekameva’dvitiyam (the One alone without a second).

You are constantly That. Truth, Reality, cannot be changed and you are that Reality. So no matter what you may regard yourself to be, in spite of bad habits of wrong mind thinking and its various undesirable results, you are constantly That and That only because That is Truth, That is Reality. It never changes, It is always the same.

This is to be contemplated upon, reflected upon, meditated upon. This is the highest good, and to do this, this human status has been given. One who does this is a human being in the true sense of the term.

One who does not do it is a human being in name only. May God grant you sagara buddhi (one-pointed, sharp intellect) to keep up sustained thought of this truth, to think about it with your keen, analytical, intellectual instrument! May this lead you to jivan-mukti! May God confer this supreme blessedness upon you in this very life! God bless you!