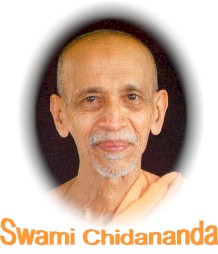 God is an unknown entity. God is an unseen entity. However, with absolutely irrefutable logic, rational argument and reason, Vedanta establishes the fact of God. And through analysis we can infer, “Yes, there must be a God; it stands to reason. It is irrational to suppose that there cannot be such a thing as God. There must be.” And scriptures also tell us that He is a Being who is sacred, who is holy, all-pure, noble and sublime. But, nevertheless, God is still for us only a concept of the mind. We have not seen God. We have not touched, nor tasted, nor smelt Him. We’ve only heard about Him. We can only infer Him. We can only imagine Him.

But then, if we are able to see in a human individual manifestations of holiness, of sanctity, of purity, of sublimity, of nobility, of goodness, of loftiness of conduct, character, nature, sentiment, thought, feeling and action, if we see something out of the ordinary something extraordinary, something special, a manifestation of those qualities that we have been taught to associate only with God then we say: “If such a human being can exist, God must exist. Otherwise, from whence do these qualities come which we do not normally see in anyone?” When we see this divinity, this holiness, this sanctity, we begin to realise:

“Yes, God I have not seen, but godliness I have seen. All the qualities attributed to God by the scriptures, by saints and sages, in all religious contexts those I see in an unusual measure, in an extraordinary measure, in this being. Because I have seen this being and this being is known to me, I am assured that God is. I know there must be a God.” And in the Vedic tradition the guru is such a being. The guru becomes for us pratyaksha devaa, visible God. God reveals Himself through the guru.

And that channel is called guru-bhakti. That is why the significant verse in the Svetasvatara Upanishad: “yasya deve para bhaktih yatha deve tatha gurau, tasyaite kathita hyarthah prakasante mahatmanah.”  If you have supreme devotion to God and the same kind of devotion to your guru, then to you, the essence, the subtle truths of the scriptures become revealed.” Thus it is that through guru-bhakti the sadhaka, the seeker, the disciple, creates an effective link, a connection, a channel which enables the guru to share with the disciple what the guru has been endowed with from God.

So, we have to provide a way for the guru to give what he wishes to give. And that is through guru-bhakti, devotion, where there is no place for the ego. If the thought comes, “I have got great guru-bhakti,” then finished, that bhakti becomes cancelled, it is nullified. You yourself must become the very embodiment of that love, that devotion. There should be no awareness of some being, some person having that quality of devotion. Then it becomes a subtle spiritual ego. The very purpose of the existence of the guru is to remove the separatist I-consciousness, the conscious­ness of being a separate being or entity, and if guru-bhakti becomes a means of boosting and sustaining that abhimana (ego), ahamkara (egoism), then it loses its purpose and becomes self-defeating.

Thus true guru-bhakti is egoless, nirabhimana (without ego), vinamra (humble). Sabari was bhaktisvarupa. She had great bhakti for Rama, but she was not conscious that she was a great devotee of Rama. Neither was Hanuman conscious that he was a great bhakta of Rama. It was his very nature. He was an embodiment of devotion for Rama. The gopis of Vrindavan did not know that they were great devotees of Krishna. They said: “All we know is that He is the one object to be adored. We don’t know anything else. We cannot do anything but adore Him. We are that adoration. It is our very self. We are not different from that. Take it away from us and we will die, we will cease to exist.” They were filled with that love, not with egoistical awareness of that love.

And what have the Upanishads put before us to illustrate true devotion? One disciple came to his guru as a young boy and the guru told him that it was his duty to collect firewood daily for the haven. He went on doing it without questioning. He was not allowed to cut green trees; and so the whole day, with great difficulty, he searched for and cut dry wood, put it on his head and returned only in the evening. The guru never gave him any spiritual instructions or teachings. Years went by. The disciple forgot time, until one day he realised he had become old, his hair and beard had become silver-white. Suddenly he burst into tears: “What is my fate? My whole life has passed away and the guru has not yet given me brahma-jnana.” He had become old. He had served his guru without question ever since he was a young boy. That was his devotion.

Another disciple was asked to take the guru ‘s cattle to pasture. He had to be with the cattle all day. The guru did not ask his wife to prepare any lunch for him, and he did not have permission to drink milk from the cows. So the whole day he went hungry, only quenching his thirst with water. Days, months, years passed this way.

And one disciple was asked to irrigate the guru ‘s fields. He had to let the water into the fields and make sure that it did not leak out. After working the whole day, one evening he discovered a leak in one of the earthen walls. He tried to plug it with some clay. It kept leaking. He tried all methods to repair it, and finally not knowing what else to do, he decided to plug it with his own body. So he lay down, curled himself into a ball and stopped the leak. After nightfall, when he had not returned, the guru became anxious and so with several of his disciples went searching for him. Finally they found him in his curled up position stopping the leak.

When such guru-bhakti is there towards the guru, such obedience, such great desire to carry out his behest, biddings and teachings, then illumination automatically descends from the guru to the disciple. The illumination in which the guru is established comes like a spark flying from one end of an exposed wire to another. For when the weeping old disciple was taken by the guru’s wife to the guru and explained why he was weeping, the guru replied:

“What! What do you mean, you have no illumination!” Immediately, the disciple became illumined. Why? Because of his total self-effacement, total dedication, his un­questioning carrying out of the behest of the guru, because of the exemplary type of devotion that filled his heart: “I have come to a guru. I must serve him. This is my greatest good fortune.”

Thus the most effective way of deriving maximum benefit from the guru is to create a channel of lofty, sublime devotion to the guru, heroic guru-hhakti. And it is that heroic guru-bhakti where there is the greatest love and reverence combined with the highest obedience, the highest

desire to please the guru by carrying out his instructions, that becomes the great channel for the inflow of guru-krupa. In that way, spiritual vision dawns and you "see" Reality, you “behold” Reality.

That is the tradition. That is the true inner dynamics of the guru sishya relationship through which the disciple is able to benefit in a maximum measure from the guru. Thus we have known from our scriptures, from our ancient bhaktas, from the narratives of ancient disciples, their relationship to their gurus. Thus we have learnt this great secret. May we all be benefited.

May the grace of all the brahma-vidya-gurus, from ancient times up to the present, be upon you. May you ponder deeply, reflect deeply, upon what an ideal disciple should be, what constitutes real discipleship, and become benefited thereby.