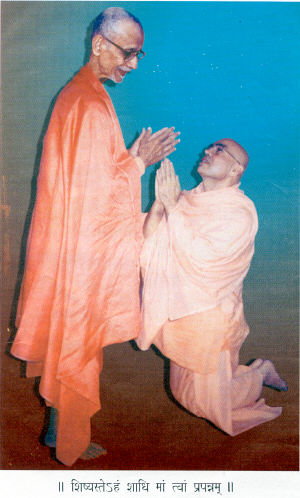 “Guru is Brahma (the Creator of the Universe), Guru is Vishnu (the Protector), Guru is Lord Maheshwara (the Destroyer), Guru verily is the Supreme Brahman (the Absolute); Prostration to that Guru.” This verse is from the famous Guru-Gita which is in the form of a dialogue between Goddess Uma and Lord Siva, in the Sanatkumar Samhita in the Skanda Purana. The first half of the second line ‘ Gurureva Param Brahma  (Guru verily is the Supreme Brahman)’ is popularly chanted as ‘Gurusaksat Param Brahma’ which means Guru is the manifestation of Supreme Brahman.

The verse sums up the relation of one’s spiritual preceptor and the God he worships with the Absolute that transcends all relationship. It establishes in no uncertain terms the sameness in essence of the three entities namely Guru, God and Self. To the neophyte in the spiritual path, this may appear to be unbelievable and irrational  but this is the true path which he has to understand and digest, sooner or later, before he can make any appreciable progress in his march towards the Goal.

Many may be familiar with the two terms ‘Guru’ and ‘God’ and may not have heard about ‘the Absolute’ at all. Their conception of Guru is limited to the physical personality of the spiritual teacher. What they understand by the term ‘God’ may be some super human person residing in some far-off world in space, in charge of the welfare of the good and punishment of the evil in this world. These are not wrong ideas. They are correct as far as they go; but they do not give the full significance of the two terms ‘Guru’ and ‘God’ that has to be comprehended properly by a spiritual seeker.

The highest truth is always couched in the most cryptic and enigmatic terms in the scripture, just as we keep very valuable gems locked up in strong steel-boxes, placed in equally strong if not stronger encasements one within the other, one such expression is the oft-quoted Rig-vedic Mantra ‘Ekam Sat Vipra Bahudha Vadanti’. The Absolute is one, the wise call it by different names. All the remaining Mantras in the Vedas and other scriptures may be said to be a commentary on this central Vedic teaching. This manifested world, consisting of countless universe with umpteen names and forms is really the Absolute itself. The apparently divergent universe is in fact an organic whole, just like our body consisting of different limbs is one complete whole by itself non-different from ourselves, nobody feels that his hands are separate from him. Similarly the sense organs and the mind-, are considered non-different from himself, although for certain empirical dealings, he speaks about them as though they are different parts. The most awe-inspiring fact that the Vedas reveal is that this world is God himself. It is His body, the Virat Purusha. It is His cosmic form. As my body is non-different from me, even so this world as the body of God is the same as God who Himself is the manifestation of the transcendent Absolute.

Therefore, we come to the conclusion that one’s spiritual preceptor and the God one worships, are in essence identical, being the manifestations of non-dual Absolute, the former a visible manifestation perceived through the sense-organs and later an invisible one conceived through one’s intellect and experienced in one’s heart. To the sincere and faithful devotee the invisible God does also manifest himself in visible forms.  The Puranas are replete with instances of God descending down to our physical plane assuming various names and forms and fulfilling certain cosmic functions when needs arise. These Puranas and epics are great scriptures explaining the truths of the Upanishads which are unapproachable to the worldly-minded. They are not cock and bull stories intended for the old,  orthodox and unintelligent. Their importance especially to the spiritual seeker, is revealed in a famous verse which says that Vedas dread those persons who approach them without a preliminary knowledge of the epics and Puranas. A clear understanding of the implied meaning of these scriptures is a ‘must’ for a seeker for his successful grasp of the higher truths hidden in the Vedas. This most important instruction about the essential non-difference of the spiritual teacher, God and the non-dual Absolute is given to us in one of the verses in praise of Lord Dakshinamurti, which says that God, Guru and the Atman are different only in their names and forms and that they mean and represent the one, non-dual Supreme Absolute, whose body is all-pervasive like the ether.

The necessity of a spiritual preceptor in flesh and blood and an omniscient, omnipresent and omnipotent God who can be conceived by the mind and therefore worshipped and meditated upon, besides the eternal, non-dual, transcendental Absolute who is beyond the reach of the mind and speech and whose manifestations are the first two, to the spiritual aspirant, can not be overemphasized. Hence, it has become a tradition among the aspirants to pay the greatest respect and adoration to one’s spiritual instructor, equivalent to that they bestow on the Deity, their object of daily worship. Some ultra-modern Acharyas in their over-anxiety to decry everything that is old and traditional, and to bring in something new to their listeners, undermines the importance of Guru in Self Realization. They bring before their audience hair-splitting arguments and very subtle reasoning to convince them about their revolutionary theories. They seem to forget that in their very act of denying the necessity of a Guru, they themselves act as a Guru to their listeners and thereby they nullify their own theory.

To quote again from Guru-Gita, three verses (60, 61 and 62) explain how Guru illumines the highest truth of the identity of the Atman and Brahman, the individual Soul and the Supreme Soul, contained in the mahavakya ‘TAT TWAM ASI’ and thus helps the disciple in the realization of the non-dual Absolute.

The subject matter of  the preceding paragraphs and much more is beautifully condensed in the opening verse of ‘Shruti-Sura-Samuddharanam’ by Sage Totakacharya -:

A crude rendering of this verse in English is as follows: “I always offer obeisance to the great Sage Vyasa who is God Hari himself, the Lord of the three worlds, worthy of praise, the embodiment of pure Sattva Guna, the grandson of Shakti, equal to Brahma the creator, of beautiful colour like the pure sky free of all clouds, a descendant of Sage Vasishtha, and of extreme penance.”

Scholars differ in the interpretation of this verse. Some would say that all the epithets used there in quality Sage Vyasa who is invoked. Some other opines that it is Lord Vishnu and Sage who are referred to by the Acharya. Still others argue that Brahman the Absolute, Lord Hari, its Saguna aspect and Sage Veda Vyasa who is none other than the Lord, all the three are invoked in this opening verse. We have for example the following verse:

“Sage Vyasa is God himself, he is Brahma without four faces, he is another Vishnu without two hands, and he is Lord Siva without the third eye on the forehead.” A very popular Dhyana Sloka among the devotees says:

Gurupurnima is known as Vyasa Purnima also. Guru is Vyasa Himself. Guru is not the cage of flesh and bones. He is living God. He is absolute incarnate, clinging to his physical frame and seeing everything in his physical set up is mere ignorance.

.  To experience the Guru’s Grace, one must see Guru as a supreme being, supra-ultra divinity, the manifestation of the Absolute Brahman and see his presence at all times, in all places and in all conditions and act accordingly is the real Guru Worship on the sacred occasion of Guru Purnima.  Om  Shanti!!