In all Conditions, I am Bliss, Bliss Bliss Absolute !!! 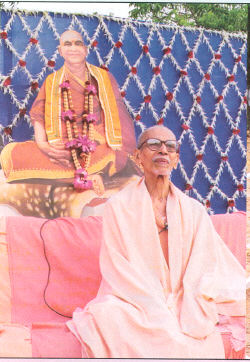 These three incidences are shared by Sri Swami Adhyatmananda as - Prasad of Satsang on Rev. Gurudev’s Birthday celebration on -24th Sep. 2002

It must have been some time in early winter of 1963-64, when after becoming president of The Divine Life Society, Worshipful and Revered Gurudev H. H. Sri Swami Chidanandaji Maharaj visited Gujarat.  He was invited to inaugurate “Eye Camp” of Late Dr. B. G. Adhwaryooji at Dhrangadhra.  Dhrangadhra being situated on the border of Kutch desert, the winter there is harsh and brutal.

Rev. Swamiji Maharaj arrived here practically with no spare clothing.  A young devotee who was responsible for Rev. Swamiji’s service found Swamiji’s shirt a little dirty.  As He traveled all the way from Rishikesh, naturally, He was in need of essential things.  They did not much time to stitch spare shirts in those odd hours of night.  With generous permission of Swamiji Maharaj, shirt was washed, dried with hot iron and neatly pressed.  Shirt was brought to Rev. Swamiji.  But with utmost surprise of that young volunteer, when Swamiji Maharaj arrived at early dawn at 4.00 a.m. in inaugural function, he found that He was wearing that very shirt, which was now wet. He simply started worrying- “What’s the matter?  I had personally washed this shirt-, dried, and ironed too & how it has become wet again?”  He didn’t dare to ask any thing to Swamiji Maharaj but later on he learnt that Swamiji Maharaj Himself dipped His shirt once again in the water before wearing it that morning, as He thought that monks are not supposed to have any fashion of ironing or pressing the clothes!

The young devotee simply got frozen not so much from cold weather, but by seeing Sri Gurudev’s renunciation. Mendicant’s not supposed to have any physical comforts or luxury.   His life on the earth should be the life of renunciation, austerity and simplicity that leads to the Supreme Bliss.

Rev. Swamiji Maharaj missed His flight.  As usual, He was compelled to travel by train – in which unfortunately there was no room available in higher classes.  Only single reservation of the train in second class three tier was available. Swamiji’s assistant requested Swamiji Maharaj to travel on that berth.  Even than He decided to travel by unreserved common class.  Some how after pursuing the matter, train authority permitted Rev. Swamiji Maharaj to travel in a goods-van, which He accepted willingly, naturally his assistant also accompanied Him leaving up his available little comfort of second class three tier. When train moved Swamiji Maharaj prepared for the evening supper by spreading his ground sheet, utensils, hot water flask, milk flask, spoons, knife, sugar pot, cup & soccer, napkins & so on…

By seeing these surroundings, poor assistant kept on grumbling, but Rev. Swamiji Maharaj was so much happy indeed in that goods-van and said so, “Look we are so much undisturbed, having total privacy, whereas passengers in reserved or unreserved coaches have to bear with discomforts from the habits of fellow passengers.  Even we are blessed to have sleep without being disturbed with undesirable noise too.  And Swamiji Maharaj imitated one of his wonderful snoring sound kharrrrr…...

To Rev. Swamiji, he is just a servant of His Master. His happiness is to serve and love the devotees of His own Guru.  Happiness is always being experienced in giving and sharing and spending.  That is how Rev. Gurudev Swami Sivanandaji Maharaj was. He was also known as a Givananda”.  He used to say; “To get more, you have to give more.”