The camp was inaugurated by Sri Swami Tadroopanandaji Maharaj, the president and founder of Manan Institute. On this occasion in his speech Swami Tadroopanandaji Maharaj said “Human birth, desire for liberation (Mumukshatvam) and company of saintly people (satsang) are rare gifts to have. Swamij Adhyatmanandaji Maharaj is a great thinker and a personification of selfless service. Devotees are fortunate to have opportunity to listen to the enlightening discourses on text of “Moha Mudgara” for seven days by Swamiji. Prominent people of the town including the president of (Bharuch Nagar Palika), assembly member, Sri Rameshbhai Mistry and Sri Vasiaji (former minister of state) were present in this Yoga Camp & Jnana Yajna.

Rev. Swamiji Maharaj gave a lecture on “Self Management” organised by at Bharuch. Another lecture in Hindi on “Yoga for better Living” jointly organized by Bharuch District (Jhilla) Management Association and Gujarat Narmada Fertilizer Corporation also was well received by people.

Members of Gujarat Divya Jivan Sangh, Bharuch were thankful to Pujya Swamiji for His visit to Bharuch and imparting spiritual knowledge and promoting spiritual activities.

On their way to Ambaji, the group came to Rojanta Kampa, farmland of Sri Pujakaka, where Cow worship was performed. Fifteen hundred cows were garlanded by Pujya Swamiji. The whole group had satsang and light refreshment on the farm before proceeding to Darshan of Holy Mother Ambaji.

Ramnagar Kampa: Sri Swami Gurukrupanandaji Maharaj organized a gathering of Saints from Sabarkantha district. People from near by twenty seven villages join the event satsang. Pujya Swami Adhyatmanandji gave a talk and Prasad (dinner) was served to all

Rev. Swamiji Maharaj along with saints and devotee group also visited Sri Sarneshwar temple. It is 500 years old temple in dilapidated condition. They also had darshan of Sri Vireshwar Mahadev where Guptganga flows from under a tree.

Pujya Swamiji conducted one more satsang on the way at Kadiyadara where about 500 village people participated.

The group proceeded to Himatnagar, where Pujya Swamiji gave discourse on “Stress in daily life and Yoga” at Shri Nalinkant Gandhi memorial Town Hall, which was filled to the capacity. Yogasana demonstration was performed for the benefit of the audience.

The last stop of this trip was Adipur. Pujya Swamiji inaugurated the function of Dada Dukhayal Sangeet Sabha, Dada Dukhayal Remembrance Exhibition and his life work. Dada Dukhayal was a freedom fighter, a writer, a singer and had been beaten and imprisoned by police on many occasions during resettlement of displaced Sindhi community after partition of the country. At Adipur- Gandhidham, Pujya Swamiji sang bhajan in Sindhi, performed a puja and placed the pot containing ashes of Dada Dukhayal in the pit where his Samadhi (Statue) will be built. Swamiji also visited ailing Dr. Gajwaniji and prayed  for his good health and speedy recovery.

It was organized by the doctor group of Rakhial (east side of Ahmedabad). This area is inhabited by underprivileged. Former minister Shri Gordhanbhai Zarkiya and. Dr. Mayaben Kodnani, (present M.L.A) were also present during the camp. 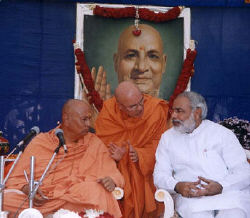 At Annual prize distribution ceremony of Gujarat state edjucation group, Shri Morari bapu & Pujya Swamiji both were present. The meeting of the two great saints of Gujarat was a great moment for the devotees to observe.

Alpha TV Gujarati channel shows “Yoga and Health” program of Rev. Swamiji’s three times a days and each episode is repeated for three days for the benefits of people.All India Radio, Ahmedabad aired three talks of Rev Swamiji on the subject of “Women Problems and Yoga”.

On January  30, "Bapu Nirvana day " (the punya-tithi) of the most revered and worshipful father of the nation, Pujya Bapuji Mahatma Gandhiji, a public prayer meeting was organized at His Sabarmati Ashram, Ahmedabad, where Vedic prayer and hymns were led by Rev. Sri Swami Adhyatmanandaji Maharaj.

In this month there were many devotees from

Devotees come from all over at Sri Chidananda Dhyan Mandir for the Darshan and feel His Divine presence and  inner peace .