During his stay at Valsad, Rev. Swamiji was invited on the occasion of Silver Jubilee celebration of Sharda Vidyavihar. Teachers of the institute were honored on this occasion. Swamiji paid visit to ninety year old Shardaben, the founder of this organization. Also many devotees invited Pujya Swamiji to their homes for His Blessings.

A Sadhana Shibir was organized at Param Praman Darshan Ashram situated at the bank of river Killa Pardi.  Swamini Tanmayananda Mataji, Swami Nityanandaji Maharaj and other saints and trustees of the ashram honored & welcomed Rev. Swamiji.  They requested Swamiji to conduct such shibir more frequently. 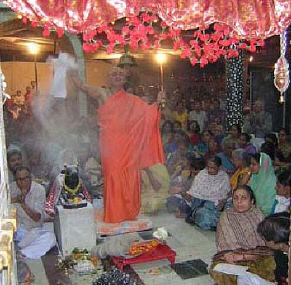 Saints Visit at the Ashram in the month of February

Sivanada Ashram feels very fortunate to have frequent visits and Satsang of many Mahatmas from other organizations at the Ashram.

Sri Sri Ravishankarji Maharaj’s Visit to the Ashram:  On the founder of “Art of Living” organization visited our ashram.  It was a joyous occasion for the inmates of the Ashram.

Satsang with Sri Sri Ravishankarji Maharaj, founder of "Art of Living" organization at the Ashram.

On , Pujya Swamiji was in

Rev. Swamiji Maharaj presided over second day session of sant Sammelan held at Mahatma Gandhi Maidan for three days long function, where more than three lacks  people had participated. He talked on Vedic Sanatan Dharma at All Religions Meeting and All India Radio,

Ludhiana Management Association organized Pujya Swamiji’s talk on “Managing the Self, A key to Success". Highlights of His talk were released by local TV Channel and newspapers.

Managing Self- A Key to Success

In great work “Kumar Sambhavam” Kavi Kalidas has said that ‘dharma, artha, karma, mokshanam arogyam mula uttamam’. Means for any achievement of the individual life to have sound body and sound mind is the first essential need.. It is ‘Sine qua none’.

Other than these positive attitudes and passionate belief nurtured by meaningful goals and motivation sustained by untiring perseverance and living compassion can achieve amazing success and abundant happiness for time eternal through life’s journey blessed by enlightened wisdom and almighty’s bounty.

Victor Hugo said that ‘there is one thing stronger than all the armies in the world………. And that is an idea, whose time has come’. So to have correct and absolute idea one must have proper attitude for the self, which can lead later on for the cosmic aptitude. Because to manage the self, the longer you live, more you realize the impact of attitude in life. Because for managing self it is very essential and important than education, than money, than circumstances, than failures, than success, than whatever anyone might think, say or do.

I’m convinced that life is 10 percent what actually happens to us and 90 percent how we react to it, say’s Charles Swindoll.. Managing the self is not merely physical fitness or mental peacefulness. It is your total being, the vision that you glorify in your mind, the idea that you enthrone in your Heart………..this is what will build your life! This is what you will become!

A man is literally what he thinks, his character being the complete sum of all his thoughts. Man becomes that of which he thinks! Says the Upanishads. And Buddha says “mind is everything……….what you think you become”. Meditations of Marcus Aurelius “your life is what your thoughts make it”. Writings of Confucius, Mohammed, Aristotle, Socrates and finally from Bible also we found “As he thinket in his heart, so is he”.

Positive thinking is also essential need for managing the self. You can lament…….. because roses have thorn………..or you can rejoice…………because thorns have roses!

To have the dynamics of goals are another need. Because no one can predict to what heights you can soar……even you will not realize it…….. Until you spread your wings!

One should not forget that the heights by great men reached and kept…… were not attained by sudden flight, but they while their companion slept…..were toiling upwards in the night.

So the secret of success why go into something ……just to test the water? Just go into it……..to make waves. Keep happiness and remember that no one can make you unhappy ……..without your consent.

And finally a key to success is to not forget that, “you are the chisel, your are sculptor and you the stone….. life is what you make it.”

On Swamiji Maharaj presided over and gave a keynote address at  Zonal conference of  Rotary Club. Rev. Swamiji  also had darshan of early morning at .

For the details of Residential Children's Camp & Residential Yoga Teachers Training Camp in the month of April-May 2004. Please refer to Upcoming Events